ARR wil be scoring music for all my upcoming films – GM 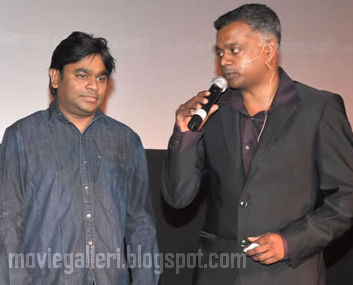 Finally, itâ€™s time to put an end to flying buzzes across the town. it looks like Gowtham Menon was drenched with absolute shocks, when he came across few baseless rumors pertaining to his next project with Ajith Kumar and his friendship with Harris Jayaraj.

â€˜It was just 4 days we discussed the project and we were all shocked to read some stories that it has been dropped due to difference of opinions. Ajith Kumar had planned for his racing tournament, much before I could approach him with the script. On the pars, Dayanidhi Azhagiri is quite occupied with couple of projects and weâ€™ll surely kick-start the film when Ajith returns from the tournamentâ€™ says Gowtham Menon, who continues adding about Harris Jayaraj.

â€˜It was Harris Jayaraj, who made such announcement on his own will and I had got nothing to do with such gestures. Even now, we have been sharing good rapport and nothing has been discussed about working together in future projects. A.R. Rahman will be scoring music for all my upcoming films including Ajith Kumarâ€™s untitled flick and Hindi remake of â€˜Vinnaithandi Varuvaayaâ€™.