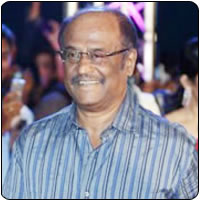 It’s record breaking time in Kollywood. Quite literally! What with Endhiran is being made on a 150+ crore budget, the music launched in Malaysia, this Robot has broken one more record. Yes, the music of Endhiran which was launched in Malaysia on Saturday (July 31) is already a rage among music lovers all over the world. Enchanting music by double Oscar winner AR Rahman with Rajini in the lead is reason enough to make people go gaga about this.

The latest in the record breaking spree is something extraordinary. The songs of Endhiran is topping the charts of iTunes which accounts to more than 70% of legal music downloads on the internet. This is a never seen trend as this is the first time any Indian song has topped the list and this has happened only after two days of the audio release. What’s next Robot ?ï»¿