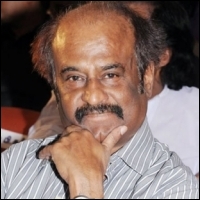 Just when news about Endhiran is subsiding, brand Rajini is making news again: Not for his next (animated) movie Hara but for his next project with director KS Ravikumar. The news is official now that Rajini and KS Ravikumar have agreed to work on a project together which has been titled “Rana”. The USP of the movie is that Rajinikanth will be acting in three roles in the movie. The last time we saw Rajinikanth in three roles was in Moondru Mugam.

Rana will be co-produced by Eros International and Ocher studios. The multi-lingual, which will be released in Tamil, Telugu and Hindi, will have music by AR Rahman who also scored music for Rajinikanht’s last movie Endhiran. Editing will be done by Anthony and Ratnavelu, of Endhiran fame, will be the cinematographer. Art direction will be taken care by Rajeevan while The technical & special effects director will be Soundarya Rajnikanth and Charles Darby of Eyeqube Studios. The shooting is expected to commence in March this year and the film is expected to be released in 2012.