Grammy for Sridhar, Deepak and Vivianne 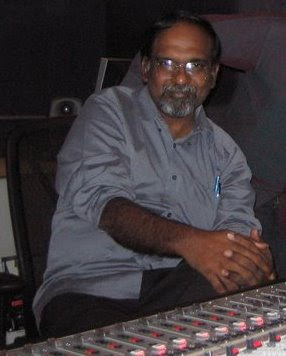 A.R. Rahman noted that “Sridhar’s professional goal was to get a Grammy. I am happy that God has answered his wish but sad that it came after his demise.”
On this occasion,Â arrahman.com spoke to Varun and Vinay Hariharan, sons of the late H. Sridhar

Q. ARR’s music had always been symbolised by H. Shridhar’s sound. How are you now coping with the fact that he is not around anymore?

A Well…, it is difficult, but giving up would be the last thing he would’ve wanted us to do. So, we are living on with a lot of great memories and I think that’s the best way one can handle such a situation.

Q. His dream had been to win a Grammy award and now sadly though he is no more with us, that dream has indeed got fulfilled. Your reaction?

A. When we heard about this we were blown away. This is absolutely amazing news as we really know what esteem musicians and technicians in the music industry hold the Grammys in. The day ARR won the Grammy we were, and we still are so thrilled to know a Grammy winner by person and after knowing about Dad’s win are just speechless. He always said he wanted to get a gramophone to play the older vinyl records at home but little did we know that it would be this miniature but most precious Grammy that’s coming home! 🙂

Q. How did you react to Slumdog the first time you heard it?
A. The first time we heard it, we listened to it not as an ARR album but as a Hollywood movie soundtrack, and for that we liked the whole Indian theme to the music as we aren’t used to hearing something like that in a Hollywood movie and that obviously gave us cheap thrills.

Q. Any particular incident or two, which he had narrated that you would like to share?
A. He has always said it was his biggest ambition and goal to put his hands on a Grammy statuette, leave alone taking one home. Even after a long day at work, getting home at probably 3 AM in the morning, he still had the energy to discuss work, who he was working with, etc. He has said many a time that ARR and his music would go places. All this is finally happening and we couldn’t be happier.

Q. Is anyone else in the family continuing to carry on the legacy musically?
A. Oh, Yes!! Both of us, Varun and Vinay are into music, follow a lot of genres in music listening to both Indian as well as international musicians and make it a point to keep up with what is happening in the world with music. It is however a little early to say whether music will become our profession. We’ll just have to wait to see.

Q. Any favourite genres or tracks that you have and any special reason?
A. We could never say, there are so many! According to me, it depends a lot on what mood one listens to a song in. We may suddenly find something magical in a song or a soundtrack that we have been listening to for months and had never noticed.