Mick Jagger on SuperHeavy: 'Everyone subsumed their egos' 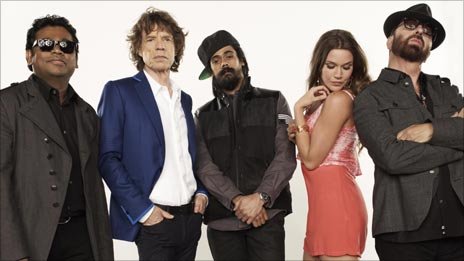 Rolling Stone Sir Mick Jagger introduces his “chaotic” new supergroup and explains why the Rolling Stones won’t be playing at the Olympics.

SuperHeavy is a band that shouldn’t work.

Musically, it flits between rock, reggae, soul, bhangra and blues – with all four vocalists competing for space across 12 eclectic tracks.

Yet the record is oddly compelling, its musical flights of fancy grounded by the supple, rootsy rhythms of Marley’s backing band.

“It was chaotic,” admits Jagger of the recording sessions, “but it was also a lot of fun”.

“Everyone had to subsume their egos to some point. There wasn’t really someone who was ‘the boss.'”

Jagger cooked up the idea for SuperHeavy with Eurythmics producer Dave Stewart, who convened the band for a fortnight of breakneck recording sessions in Los Angeles in 2009.

“This wasn’t a project where you put a band in the studio and you take as long as you want,” Jagger says.

“Everyone was busy, so we set the parameter so on the first 10 days, to see how much we could do.”

Those sessions produced nearly 40 hours of music, often in the form of extended jams, which were gradually whittled down to form coherent songs.

“If you can play something for 35 minutes, you’ve got to be enjoying it,” Jagger points out.

As someone who has chiefly written alone or in partnership with Keith Richards for nearly 50 years, the collaborative process was something of a revelation for the strutting Stones frontman.

By way of illustration, he describes the creation of a song called One Day, One Night.

“AR Rahman set up this really simple groove,” he says, “and on top of that I started playing two minor chords on the guitar.”

“I drifted into the lyrical idea of this guy being drunk in a hotel room, and he’d obviously had a row with his girlfriend.

“Dave said: ‘Why doesn’t this guy wander across the street where Joss is singing?’

“So I had to write a bit where I go outside, and we changed the key from a minor key to a major key. Joss is singing in that major key, and I go on stage to join her.

“That was a very different way of writing a song. I’d never really done that before.”

In the end, the album contains just one track where Jagger is credited as the sole author.

I Can’t Take It No More is a brutally straightforward rock song with a caustic lyric.

“All you scurvy politicians,” the 68-year-old spits, “crying endless contrition. It really gets my goat, it sticks in my throat.”

It’s angry (“angry-ish,” Jagger corrects) but he denies that the song was directed at anyone in particular.

“It’s just general. It is so apparent that politicians’ promises are usually broken.

“They expect us to believe they’re going to provide a panacea, but they’re always entrapped by the problems they inherit. They find themselves the prisoners of practicalities and realities.”

It’s a sympathetic reading of the political system for someone who is more readily associated with the revolutionary counter-culture of the 1960s.

This is, after all, the man who wrote Street Fighting Man in response to rioters who almost toppled Charles De Gaulle’s government in France in 1968.

But Jagger has often said the single was not supposed to be a call to arms for “sleepy London town”.

“I never believed that the violent course was necessary for our society,” he told one interviewer in 1987.

“For other societies, perhaps, but in ours it’s totally unnecessary.”

Asked about this summer’s riots in the UK, Jagger’s response is measured and dryly analytical.

“There’s a long history of rioting in England and it seems to be that it goes in cycles,” he says.

“This summer was described as the ‘consumer riots’ but, you know, in the race riots in the US 1960, there was always looting as well. It’s always a by-product.

“Whether this all portends a complete breakdown in society, as David Cameron portrayed it, I don’t know.

“Of course it exposes problems that have to be faced. But whether these problems are insuperable or not is a matter of conjecture.”

Jagger proves easier to pin down on musical matters – specifically whether the Rolling Stones will play at the 2012 Olympics.

“Has anyone actually approached us? No,” he says.

“But Bryan Adams said: ‘Whatever you do, don’t do any Olympic openings,’ after he did the winter Games in Canada.

“It was so cold, and he had to wear this bizarre suit… Although that’s not going to happen here – it would just rain.”

The star adds that he was unimpressed with the UK’s contribution to the closing ceremony at the Beijing Olympics.

“It wasn’t a brilliant piece of theatre when they left the stadium with a London bus with Jimmy Page on it,” he laughs.

SuperHeavy is released on Monday, 19 September on Polydor Records. The single, Miracle Worker, is out now.