RAAVANAN SHOWS IN THE US 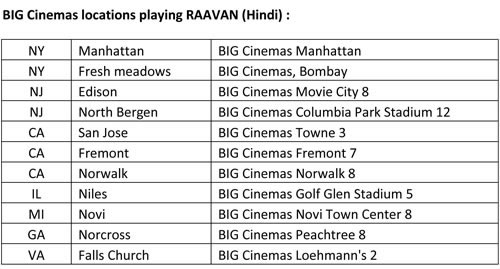 Raavanan and its Telugu version Villain will be released and marketed by the Big Cinemas, which belongs to the Anil Dhirubhai Ambaniâ€™s Group Reliance Media Works. Being a Mani Ratnam directed venture, this film has garnered enough attention already. Yet another factor is that the filmâ€™s lead stars Vikram and Aishwarya Rai Bachchan enjoy a huge fan following among the Tamil and Telugu community. The highlight of Raavanan is that its music has been scored by the Oscar winner A R Rahman.