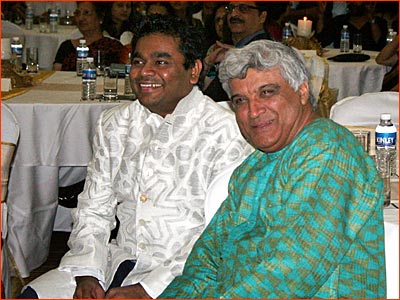 Looks like Bollywood is leaving no stone unturned to amend the Copyright Act. Last week, lyricist Javed Akhtar and music composer AR Rahman met Tamil Nadu Chief Minister M Karunanidhi in Chennai to garner his support for the cause. A source says, â€œEyebrows were raised when Akhtar and Rahman met Karunanidhi. There were even whispers in Chennai about their meeting. The reason was obvious that the duo wanted Karunanidhi to pledge support for their cause.â€ While Rahman remained unavailable for comment, Akhtar admitted to the meeting but denied having lobbied for the Copyright Act. Akhtar says, â€œA R Rahman and I went to thank Karunanidhi because being a writer himself, he has always been supportive of this cause.â€ While HRD minister Kapil Sibal is doing his bit by bringing Aamir Khan, who had earlier resigned, back to the committee, it will be definitely interesting to see Karunanidhiâ€™s contribution in wrapping up this long-standing issue. Bollywoodâ€™s creative brigade is fighting for the amendment of the Copyright Act to receive a better share of the revenue. The Copyright Amendment Bill is likely to be presented during the Budget session of Parliament, before it is referred to a standing committee.