RAHMAN IN TORONTO FOR 127 DAYS 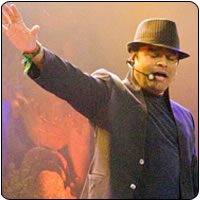 The highly successful Oscar winning combination of Danny Boyle, AR Rahman and Simon Beaufoy have joined hands once again, this time for a movie titled ‘127 Hours’. This movie is based on a real life incident of Aron Ralston, an American mountain climber who sacrifices his arm to free himself from being trapped in a boulder for nearly 5 days. The music of this movie has been scored by none other than AR Rahman.

The movie was earlier screened at the telluride film festival and saw a couple of people having panic attacks. The impact of the film has been such, say analysts. Rahman will be in Toronto for the screening of the movie at the Toronto film festival