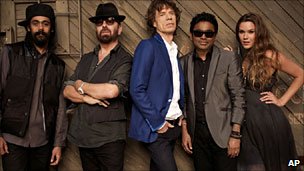 SuperHeavy’s album is expected to be released in September.

“Dave said AR [Rahman] we want your voice in this album… we want this to be a great Indian song too. A long dream for me to raise one of the morals of Indian culture which is Satyameva Jayate and make it as a song,” Rahman was quoted as saying by the Press Trust of India.

“This is historic… it is iconic in a way. I hope people will like it,” he said.

Jagger formed the band in May, saying that he “wanted a convergence of different musical styles”.

“It’s different from anything else I’ve ever been involved in,” Jagger told Rolling Stone magazine .

“The music is very wide-ranging – from reggae to ballads to Indian songs in Urdu.”