SHRIYA DOES IT FOR A R RAHMAN 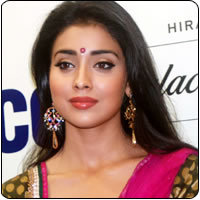 Shriya Saran is currently busy with Chikku Bukku, which has Arya playing the male protagonist. The lady also has Rowthiram in Tamil and a Telugu film titled Don Seenu. So, what made her accept an item number in the SJ Suryah-directed Komaram Puli? The actress says that it is only for A R Rahmanâ€™s music. She is so confident that this song will turn out to be a huge hit like all other ARR songs.

Shriya is back in the South Indian film circuit after a short stint in Bollywood and Hollywood. She had acted in Deepa Mehtaâ€™s Hollywood flick, Whatâ€™s Cooking Stella?